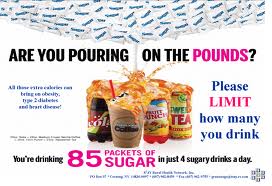 Over the 1st year of intervention, those adolescents who received continued intervention to decrease sugar-sweetened beverage consumption noted significantly less weight gain.  However, when left to their own devices for the 2nd year w/o supervision, the difference in weight between the two groups was negligible.  In truth, this shouldn't be a surprise to any parents of teenagers who need constant supervision & reminders to do what they're supposed to do since they appear to be more externally driven as opposed to internally motivated.  Hopefully, they'll see the light and make better nutrition choices before their body mass index clears 30kg/m2.