This past Friday, a series of studies & editorials was made available early online prior to print publication in the New England Journal of Medicine, all of which concluded that sugar-sweetened beverages have an impact on weight (gain). 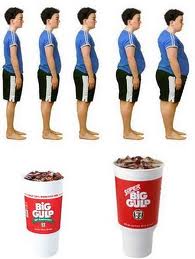 In the first study, the authors followed for 18 months 641 normal-weight children ranging from just under 5yo to just under 12yo who were randomized to 8oz of either a diet, sugar-free beverage or a similar non-diet, sugar-sweetened beverage.  The caloric difference was only 104 kcal/drink.  The drinks were distributed at school to be sure the participants had access.

Granted, 1 out of 4 children dropped out of the study.  But using an intention-to-treat analysis, the authors noted that body mass index z-score increased to a lesser extent in those randomized to diet, sugar-free beverages compared to those who drank an extra 104 kcal/day.

So as much as I don't like artificially sweetened beverages (high fructose corn syrup tastes better), I better start to like drinking water (even though I'm way beyond 12yo).