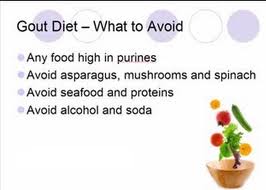 Gout, a painful inflammation of the joints, is caused by excessive uric acid, which in turn, can result from a diet of high-purine foods, eg all meats, seafood, beans, peas, lentils, oatmeal, spinach, asparagus, mushroom, yeast, alcohol (including beer, wing & hard liquor), as reported in last month's Annals of Rheumatic Diseases.  In this study, the authors evaluated 633 patients with gout and analyzed food consumption for 2 days prior to a gout attack and concluded that an increase in purine-rich foods could increase risk of recurrent attacks by almost 5-fold.

Staying well hydrated certainly helps keep the uric acid in solution.  Granted, once the uric acid starts crystallizing out, you can deal with an acute attack by taking an anti-inflammatory agent, either an NSAID or a steroid.  But wouldn't it be better to have a more natural option?  In another analysis of this same group of individuals published last month (last week actually) in Arthritis & Rheumatism, the authors also noted that consumption of cherries over 2 days was associated with lower risk of an attack of gout. 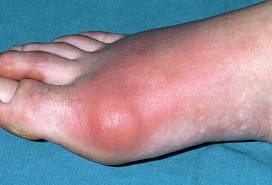 So what's the practical application of these 2 analyses of the same small population found via a Google ad?  Well, first the authors confirmed that consumption of purine-rich foods can increase one's risk for a gouty attack.  But it's a bit too early based upon such a small sample in an observational study w/o evidence of cause & effect to recommend eating cherries regularly, especially when these fruits are not typically found year round in any part of the globe but in fact must be flown in.  So much for the locavore movement.