I was having some kind of pain kind of sharp in my abdomen area, and boyfriend asked me if i think im prego, could i be ive bever been prego...

I've been real sweaty the part few days I'm on penicillin vk for an infection could these be the reason??

Could People get chelemedia in there mouth?

ED & Heart Disease: It's All in the Plumbing Part 2

It's deja vu all over again.
Yogi Berra 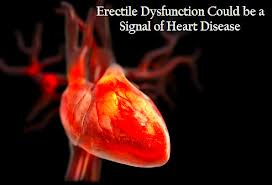 As I was reading a prospective population-based study published online 2 days ago in PLOS Medicine, I thought I was experiencing Yogi Berra's above noted quote, as the authors concluded that severity of erectile dysfunction (ED) was associated w/risk of cardiovascular disease & all-cause mortality.  In fact, the authors followed for an average of 3yrs 95,038 Australians older than 45yo and took into the account the usual suspects such as age, tobacco use, alcohol consumption, education, income, physical activity, diabetes, high blood pressure, high cholesterol, and obesity (body mass index).  And despite this, those men who reported severe ED had a greater risk of heart disease and of death from any cause compared to those who denied having any ED. 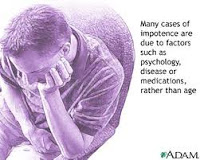 And just how was ED assessed?  By a single question!  How often are you able to get and keep an erection that is firm enough for satisfactory sexual activity?  The participants could respond with "always", "usually", "sometimes", "never", and "I would rather not answer this question" with the first 4 answers corresponding to no ED or mild, moderate & severe ED.

Well, after just a bit of digging around, I found the meta-analysis & review article referenced in my post from 2 weeks ago that arrived at the same conclusion: ED is linked to cardiovascular events & all-cause mortality.  What this means for you and me is that we need to go beyond just writing a prescription for Viagra or Cialis.  We need to consider ED the canary in the mine and look at the patient's risk factors for heart disease & death.

PEDs: Is It OK Outside of Sports? 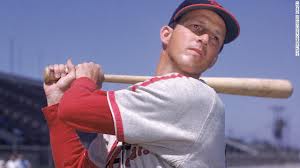 Back in the day, you competed w/your God-given talent(s).  If you were blessed w/more muscle mass, greater cardiac output, or better lung capacity, you had an edge up on your fellow competitor.  Of course, back then, you weren't under pressure to make tons of money either.  Sure you got paid, but many also played for the sake of the game with honor, chief among them, the late Stan Musial. 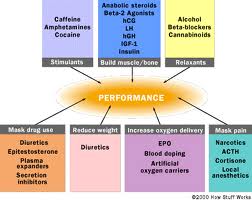 These days, with advancement in medical science, we're able to diagnose injuries earlier & more precision, perform surgical repairs unheard of in decades past, and with improved nutrition & conditioning, extend an athlete's competitive years.  Or are we?  As it turns out, some of our heroes have also been engaging in better living through chemistry, otherwise known as performance enhancing drugs (PEDs).  And no, we're not referring to Viagra & Cialis. 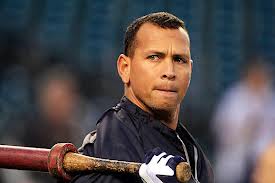 Lance Armstrong recently came (kinda) clean after all these years of denial.  Mark McGwire finally admitted to use of steroids while breaking records.  Barry Bonds was convicted of obstruction of justice regarding his testimony in the BALCO trial.  And as of yesterday, Alex Rodriguez joined that notorious list, as described in an expose published in the Miami New Times, having his name mentioned several times in a log kept by an anti-aging clinic. 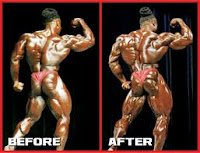 But what about you & me?  We're not chasing down 7 Tour de France trophies or attempting to get into the Hall of Fame.  So in our case, there's no proscription against taking medications to improve our health (or to treat hypogonadism, andropause, menopause and even growth hormone deficiency).  Let's not overlook the obvious which is that these professional (and some amateur) athletes wouldn't risk taking these regimens if they didn't believe in and notice some improvement.  But be smart about it if you decide that anti-aging or age management medicine is right for you.

Don't buy your medications & laboratory tests from your doctor.  They don't need to profit as middlemen.  Instead, get your legally prescribed testosterone and growth hormone (assuming your physician deems it warranted) from your local pharmacy.  CVS, Walgreens, WalMart, etc all carry these medications.  If you need to do so, go to a compounding pharmacy but there's no reason you need to buy it from your doctor!

And be careful if your doctor tells you that s/he doesn't need to examine you, that a phone call or online survey will suffice.  In fact, federal regulations require that we meet with and physically examine you at least once a year if we're to provide ongoing care.  Think about this before you veer away from traditional medicine.

Migraines in Children: Time to Treat Like Little Adults? 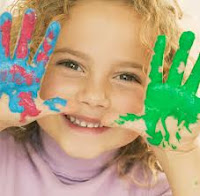 Yesterday, we discussed new recommendations coming out of the American Academy of Pediatrics suggesting that we treat children & adolescents as little adults and offer metformin to those who are newly diagnosed with type 2 diabetes, in addition to the usual lifestyle modification recommendations. 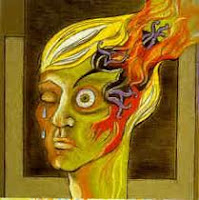 So of course I read w/interest 2 studies published online earlier this week in JAMA Pediatrics in which the authors reviewed the literature looking at how to treat children & adolescents with headaches, especially migraines.  In the first review, the authors concluded that only topirimate & trazodone might have limited evidence supporting its use in children & adolescents suffering from migraines.  However, all other commonly used medications in adults lack any supportive data. 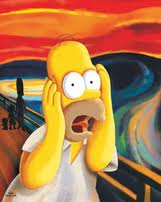 In the second review, ostensibly a comparison of the various triptans available for use in adolescents, the authors were only able to conclude that 53-57% of migraine patients responded to placebo.  Given such a tremendous response rate, it's near impossible to prove efficacy of triptans in adolescents.

What is the best way to male my hair grow faster?

People are on a Gaussian distribution, meaning some are outliers. How do outliers get Dr's to beleive their sym's in a timely manner?

How to deal with geradia ?

Diabetes in Children: Time to Treat Like Little Adults? 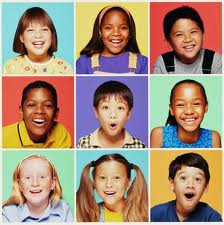 I know, I know.  I know what you're wondering.  What's a geriatrician doing writing about pediatrics?  Let's not forget that first & foremost, I'm a family physician, so my training (albeit decades ago) included care of little people.  Except that back then, it was pounded into my thick skull that children are not little adults and should not be treated as such.  In fact, they have their own needs & idiosyncrasies.  Funny!  I think I hear myself saying the same thing except substituting "elderly" for "children".

In any case, I digress because just yesterday, the American Academy of Pediatrics released their Clinical Practice Guideline regarding the management of newly diagnosed diabetes type 2 in children & adolescents (a rarity back in the day).  The full text of their new guideline is now available in their Pediatrics journal.  What's different in this new guideline and sets it apart from previous guidelines is the willingness, nay, recommendation to offer the biguanide, metformin, to lifestyle modification after making an initial diagnosis of type 2 diabetes in children & adolescents.  The irony is that we've been taking the same approach for adults for several years now, as updated in this month's Diabetes Care. 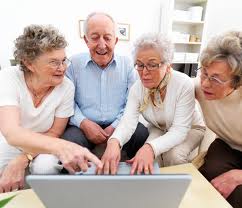 Unfortunately, beyond insulin, most of the other pharmacologic options available for use in adults have not been approved by the Food & Drug Administration for use in children & adolescents.  Bottom line: we need to really focus on lifestyle modification in both the young, middle-age & elderly.  If not, we're dooming them to a lifetime of medications.

My boyfriend has white pus and blood in the right butt cheek , dr. Said I should try warm compressed and drain it ,what meds I could give him for now?

My boyfriend has pus near the butt cheek , what is the best way to cure it?

Is exercise good for an enlarged postrare? 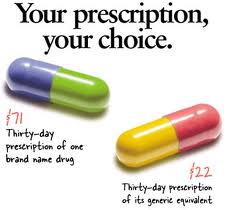 Given a choice, most health plans will recommend a generic medication over a similar but branded one.  Of course, one has to remember that prior to the medication being made available as a generic, it was once sold only under a brand name.  In general, each pharmaceutical company wants to differentiate its me-too drug from everyone else's in the same drug class.  But those who handle the purse strings would like us to believe in class effect over drug effect, that they're all the same & replaceable. 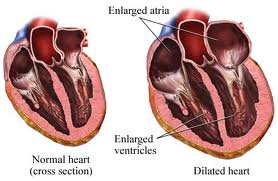 Well, in a meta-analysis published online earlier this month in the American Journal of Cardiology, the authors compared carvedilol, a beta blocker, to other beta-1 selective beta blockers (atenolol, bisoprolol, metprolol & nebivolol) and concluded that carvedilol was better at lowering all-cause mortality in patients suffering from heart failure. 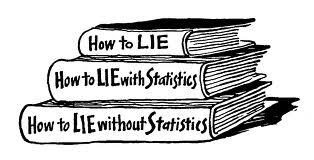 The problem with this meta-analysis is that it's a meta-analysis.  It's not a direct comparison of each drug to its competitors.  This type of drug comparison study is rarely published because it's rarely funded & performed.  After all, which pharmaceutical company wants to take the chance that their already cleared & marketed drug will lose to a competitor.  So you have to leave it to the government to fund this type of study OR you look at the existing literature and run some tricky statistics.

Will I change my prescribing habits based upon a single study, especially a meta-analysis?  Probably not.  At least not until we find more of a trend as opposed to a possible fluke.  As always, discuss your concerns with your prescribing physician before stopping any medication.

My boyfriend is 21 has a hernia it won't go back in and is in pain . Should he go to the hospital asap?

Im 15yr, 145lb, 5ft. I have depression & am going thru some hard times. Im on Zoloft & in therapy. But it doesnt seem to help. Any advice?Iv tried all

When is the best time for mating to produce healthy baby?